Wheat has been increasingly criticized in recent years. With the promotion of raw food and fueled by various publications in the field of human medicine, more and more say that wheat is harmful for dogs and cats and is making them fat and sick. But are these allegations really proven? Here is our fact check.

This statement is based on the fact that wolves and wild cats, the ancestors of our pets, do not naturally eat grain. But it should be mentioned that they indirectly take in carbohydrates in the form of wild grasses and berries through the gastrointestinal tract of their prey.

Of course dogs and cats as carnivores are able to cover their energy needs with protein and fats alone. They are not necessarily dependent on carbohydrates. But it would be wrong to claim that they are harmful to them. According to a study by Axlesson in 2013, dogs have over ten additional genes that are important for the digestion of starch. This is seen as an adaptation to living together with humans and our starchy foods. In addition, dogs and cats can use starch as an alternative source of energy. Therefore, meat can be saved and thus the content of protein and phosphorous in the food ration can be reduced. This relieves the liver and kidney and is especially recommended for older animals. 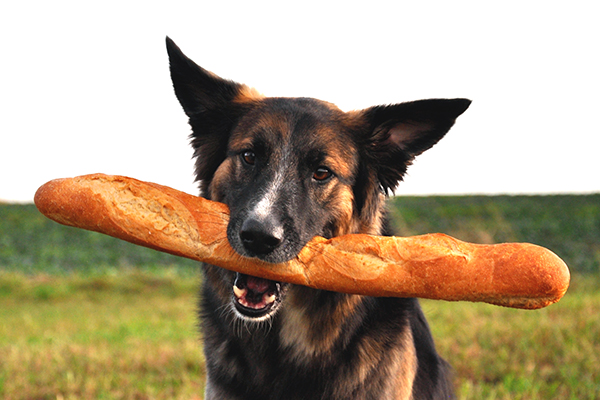 Wheat is rich in carbohydrates and also provides a high quality protein (gluten). Carbohydrates, proteins and especially fats are among the primary sources of energy. If the calorie supply exceeds the actual energy requirement of the animal, they will become overweight in the long-term as a result. However, it does not matter from which source the calorie comes from. This is how high-fat meat, chews or a shot of oil on top can lead to excess weight, just as easily as too much wheat.

The right portions are crucial. Wheat flour is used in the production of dry food; it makes it possible to get the brisket cut. Dry food is considered to be highly concentrated, that means 250g of dry food provides just as much energy as 1kg of wet food. However many pet owner feel as if the amount of dry food in the bowl is too little and that is why they top up the portion. It is similar with dog treats. They too are highly concentrated foods, which are not always strictly portioned. Many of the diseases that are attributed to wheat are often a result of being overweight.

In human medicine, wheat is repeatedly raised as a trigger of celiac disease, food allergies as well as contributing to irritable bowel syndrome. Human celiac disease is a genetic food intolerance to gluten that, if left untreated, results in prolonged damage to the intestinal mucosa. This disease does not exist in dogs or cats. Fortunately allergies to wheat are very rare among our four-legged friends. The symptoms described for irritable bowel syndrome in humans are abdominal pain, bloating, constipation and/or diarrhea. These symptoms can also be observed in dogs and cats after the administration of carbohydrate-rich food, but are most likely the result of insufficient meals and a lack of routine proportions.

This is where the following tips come in handy:

It has not been scientifically proven that a carbohydrate-rich diet provokes the formation of tumors. However caution is advised in the case of existing tumors, because tumor cells have a very high-energy requirement that they mainly cover with glucose. In order to not support their growth and spread, it is recommended to avoid or reduce the intake of easily available carbohydrates and instead offer a rather high in fat and high in protein feed.

As long as there is no functional impairment of the liver and kidneys in addition to the tumor disease, it is actually beneficial to reduce the carbohydrate content of the diet and cover the energy requirements largely through fats and proteins. However, if there is a disease in both organs, increased protein intake would promote their progression.  In this situation the addition of carbohydrates, despite the tumor, is necessary.

Therefore, wheat can be a valuable source of energy and is much better than its reputation.