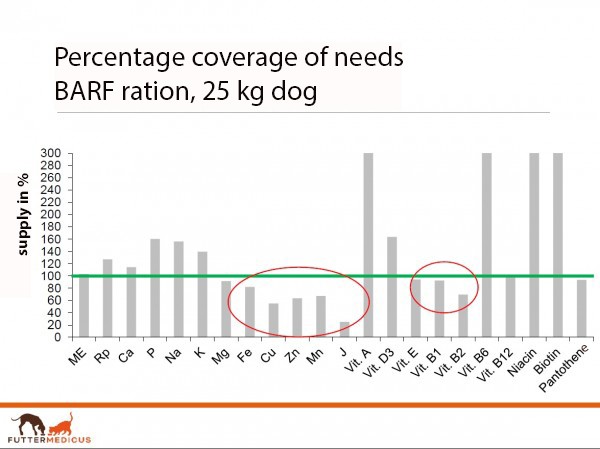 Despite having a large and carefully selected variety in the bowl, the ration may not automatically meet your pets needs. This has been proven by several studies in recent years.

A typical BARF ration often consists of meat, fish, bones, liver, dairy products, vegetables and fruit. In this example we show the pitfalls and problems that can arise when putting together a ration for a 25 kg dog. 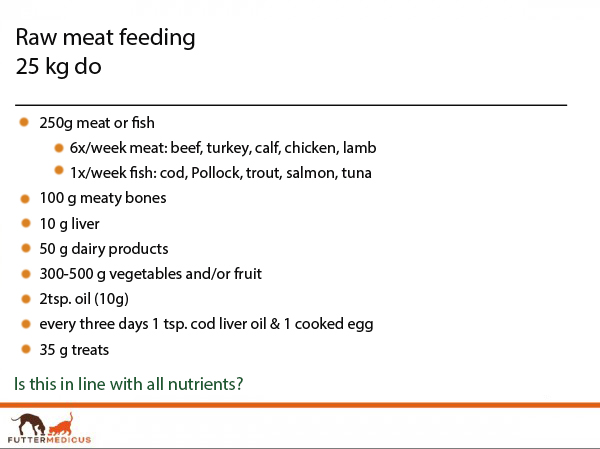 In the diagram above, the X-axis shows the nutrient supply of the dog in percent. The individual nutrients are listed on the Y-axis. The green line shows when a dog is supplied with enough nutrients. Despite the varied BARF ration, the trace elements and also some B vitamins are currently not sufficiently covered.

Mistakes with feeding - preparation by feel

Muscle meat makes up a large part of the ration. If you take a closer look at the composition of muscle meat, it becomes clear that it consists of 75% water, 25% protein and 30% fat. Minerals are only moderately present and trace elements even less. Even additional feeding of rumen, herbs or healing earth cannot compensate for these deficiencies. The supply of copper and zinc is especially deficient according to Dillitzer et al. If there is only a small amount of fish and no seaweed in the diet, there is an undersupply of iodine. Feeding without bones leads to an undersupply of calcium and an unfavourable calcium-phosphorus ratio. In contrast, an oversupply of calcium can lead to a secondary zinc deficiency if too much bone is fed. Feeding liver by feel also has pitfalls. An over-generous supply of liver or cod liver oil can lead to vitamin A. Omitting these two ingredients will result in an undersupply of vitamin A and D.

We often hear the argument that a ration calculation for dogs is unnecessary because we humans do not check our meals mathematically either.

In the picture above you can see the nutrient requirements of a human compared to a dog. It is striking that dogs have a significantly higher requirement. Due to evolution, the four-legged friends did not have to adapt to a lack of nutrients, as their prey animals contained all nutrients in high quantities. Especially in the growth phase, a dog's nutrient requirements are very high. A puppy is fully grown within 10-18 months. A human, on the other hand, grows much more slowly and takes 16-20 years to reach its final size.

The dog compared to the wolf

The second argument against a ration calculation is that dogs are optimally provided for if the diet of the wolf is taken as a basis.

Wolves in the wild are not optimally fed. The life expectancy is on average 5 years and quite a few animals have a weakened immune system due to a fluctuating nutrient supply or even starve to death. In captivity, wolves live for 12-16 years. Due to the hunt for prey and the cold outside temperatures, a wolf has a significantly higher energy metabolism than our dogs. For this reason, wolves eat 10-21% of their body weight, i.e. 4-8 kg of meat. Labradors, poodles and pugs are real couch potatoes compared to their wild relatives. They do not have to hunt and usually live in well-tempered homes. In most BARF rations, the dogs get 2-6% of their body weight as food amount. Especially for older and unathletic animals, this amount is often already too much. The nutritional requirements of a domestic dog must therefore be met with a smaller amount of food than is the case with wolves. Certain parts of a prey animal such as fur, thyroid gland, intestinal contents and parts of the central nervous system are not fed to our dogs for legal and hygienic reasons. The nutrients they contain must therefore be supplied from other sources.

Such blood tests, also called BARF profiles, check the blood levels of calcium, phosphorus, copper, zinc, iodine, vitamin A, vitamin D and a thyroid hormone. These parameters in the blood are not influenced by diet alone. Age, gender, race and any diseases also influence these blood values. Calcium is 99% stored in the bones. Only one percent of the available calcium can be measured in the blood. The body has several regulatory mechanisms to keep the calcium level in the blood constant. If there is an oversupply of calcium, it is increasingly stored in the bones and excreted through the kidneys. If, on the other hand, there is a shortage of calcium, calcium is released from the bone and absorption in the intestine is increased. This means that a deficient supply of calcium is not visible in the blood. The phosphorus content in the blood is very dependent on age. Growing animals have twice as high phosphorus levels as adult animals.

For example, to make a reliable statement about the copper status, an invasive liver biopsy would have to be performed. The zinc blood level is strongly dependent on the time and the type of feeding. In the end, an abnormal blood result does not necessarily indicate a faulty ration, nor does an abnormal result mean that the ration is sufficient.

Supplementation for a needs-based ration

In order to compile a ration that meets the needs, there is no way around supplementation. You can supplement with natural products such as eggshells, brewer's yeast, seaweed, kidney and liver, or you can use ready-made mineral feed mixtures. With the first option, the question remains what the dog needs and in what quantity. With the second option, the decision must be made as to which mineral food is suitable for the dog. If a dog is fed bones, for example, the mineral feed must not contain too much calcium. If liver is fed, attention must be paid to the vitamin A content.